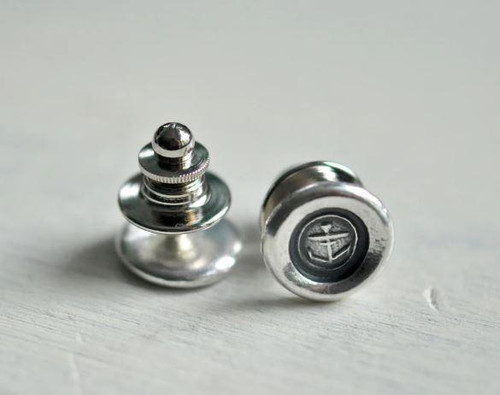 Stay grounded with a sterling silver anchor wax seal tie tack pin... not just for men since it makes a great lapel pin, jacket pin, and hat pin, too!

In heraldry, the anchor is symbolic of hope, stability, and religious steadfastness.
The anchor is also the symbol of the State of Rhode Island, appearing on the official seal and flag. The anchor represents the maritime heritage of the state, as well as the Bible verse "hope we have as an anchor of the soul," referring to Rhode Island's founders fleeing from religious persecution in Massachusetts.

The tie tack was first introduced back in the 1800's to keep the Four in Hand tie in place so that it wouldn't shift and wrinkle. Later, it became a very popular men's accessory, with all sorts of choices in design and material.