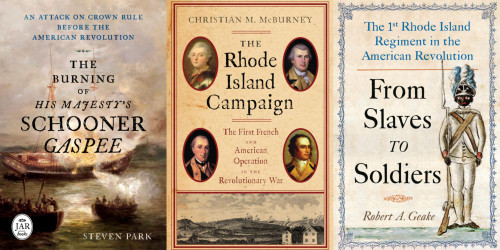 Learn about Rhode Island during the American Revolution with this bundled book set!
Includes:

The Rhode Island Campaign by Christian McBurney
The Marquis de Lafayette and the French Navy Join Nathanael Greene, John Sullivan, and a Continental Army to Attack a British Stronghold in New England. The story of the first French and American operation in the Revolution, the attempt to push the British out of occupied Newport, Rhode Island.

From Slaves to Soldiers: The First RI Regiment in the American Revolution by Robert A. Geake
Known as the “Black” Regiment, the Story of the First Continental Army Unit Composed of African American and Native American Enlisted Men. Historian Robert A. Geake with Lorén M. Spears tells the important story of the “black regiment” from the causes that led to its formation, its acts of heroism and misfortune, as well as the legacy left by those men who enlisted to earn their freedom.

The Burning of His Majesty's Schooner Gaspee by Steven Park
Considered one of the first acts of rebellion to British authority over the American colonies, a fresh account placing the incident into historical context. Between the Boston Massacre in 1770 and the Boston Tea Party in 1773 a group of prominent Rhode Islanders rowed out to HMS Gaspee,which had run aground six miles south of Providence while on an anti-smuggling patrol. After threatening and shooting its commanding officer, the raiders looted the vessel and burned it to the waterline.