A Renegade History of the United States 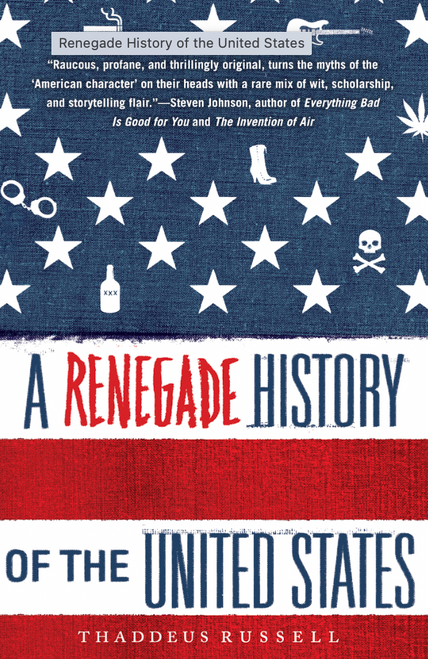 A Renegade History of the United States

This provocative perspective on America’s history claims that the country’s personality was defined not by the ideals of the elites and intellectuals, but by those who throughout  have lived on the fringes of society history—slaves, immigrants, gangsters, and others who challenged the conventions of their day.

“Raucous, profane, and thrillingly original, Thaddeus Russell’s A Renegade History of the United States turns the myths of the ‘American character’ on their heads with a rare mix of wit, scholarship, and storytelling flair” (Steven Johnson, author of Everything Bad Is Good for You and The Invention of Air ).

An all-new, stunning, and controversial story of the United States: It was not “good” citizens who established American liberty, declares Thaddeus Russell, but “immoral” and “degraded” people on the fringes of society whose subversive lifestyles legitimized the taboo and made America the land of the free.

In vivid portraits of renegades and their “respectable” adversaries, Russell shows that the nation’s history has been driven by clashes between those interested in preserving social order and those more interested in pursuing their own desires. The more these accidental revolutionaries—drunkards, prostitutes, gangsters, unassimilated immigrants, “bad” blacks—persevered, the more American society changed for the better.

This is not the history taught in textbooks or classrooms—this renegade book will upend everything you believe about the American past.

A Black Women’s History of the United States

Dissent: The History of an American Idea

Drink: A Cultural History of Alcohol