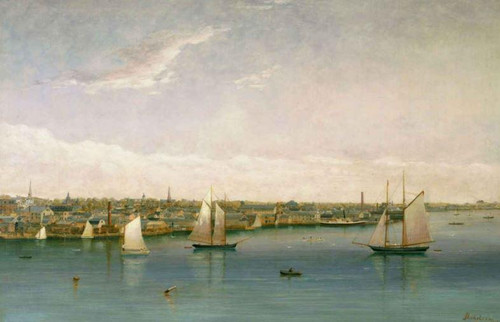 This luminous scene of Newport harbor was painted by James Nicholson, and is one of less than a dozen works by this Newport artist. Nicholson was born in Scotland in 1848 and came to Newport as a master joiner to work on the interior of the new Newport cottages, including Marble House and the Breakers.

A self-taught artist and an early photographer, Nicholson died in Newport in 1893. The vista that he painted gives us an accurate and detailed picture of Newport harbor in the late 19th century, including factories, wharves, and many Newport church spires. Also included is at least one actual, historic ship: EOLUS, the steamship shown docked on Commercial Wharf to the right of the center. EOLUS ran from Newport to Wickford, R.I. from 1871 to 1892, taking passengers to the railroad station in Wickford junction.

The painting is today housed in the Museum of Newport History.